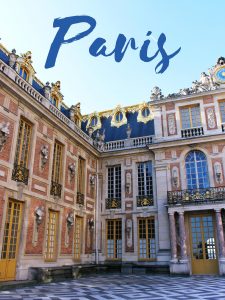 The very last week of my five week trip to Europe in December and January was spent in Paris. The plan was to continue travelling until mid-March, but– and I should really expect this by now– things didn’t go according to plan. I touched on it briefly in an Instagram post, and maybe I’ll talk specifically about it in the near future, but throughout the entirety of my travels I was increasingly overwhelmingly depressed and anxious.

It was in Dublin that I made up my mind about going home early to take care of myself, rather than continuing to travel when it was obviously exacerbating pre-existing issues. I found myself both eagerly counting down the days until my flight home, while also trying desperately to get out of my head and just enjoy whatever was right in front of me.

It’s kind of fitting then, I think, that my journey ended (or paused, I suppose) in Paris. It’s overwhelming. It’s gorgeous and lively and full of people and history and art and ridiculous extravagance. “No one does ridiculous extravagance like the French,” became a near-daily comment I made to my sister. On our first full day in the city we explored the Musée d’Orsay, and while it was already a beautiful building filled with beautiful art, we didn’t really expect to turn a nondescript corner and walk into an ornate, gilded ballroom. All my sister and I could do was turn to each other and ask, “what?” It seemed absurd, and unreal.

That feeling of disbelief followed me throughout the week. By our last day there, which we spent at le Château de Versailles, I was about 99% sure I was in a dream and not an actual place. None of this wealth and excess and luxury could possibly be real. The blues and blush of sunset reflected in the windowpanes of le Grand Trianon matched the pink marble of the building itself, like it was a painting, like its colours were chosen specifically for that reason. It didn’t make any sense. Even now I find it really strange to look back on pictures of that day because I have trouble believing it actually happened to me.

It was a strange surreal week of my life, in which I was at almost all times both incredibly sad and incredibly amazed. I debated just posting my video and photographs and not addressing how shitty I felt the whole time (like I did in all my other posts about this trip) but during this week it was just impossible to ignore, impossible to not address. My mental shape is obviously going to deeply affect my perception and experience of anything. I’m not sure I’d be able to write about Paris without also writing about being sad. It’s easy to show off the highlight reel, but the more I do it the more its inherent dishonesty puts a bad taste in my mouth. I’m not really interested in lying to other people or to myself about how I was feeling. But it’s been tough to be honest about it, it’s been tough to talk about travelling with depression or anxiety (or any illness, for that matter) because the general response is “well I haven’t had a vacation in 27.531 years” or “just enjoy it! Live in the moment! CARPE THAT DIEM! NAMASTE!” It took a lot for me to realize that– while of course I want to be enjoying myself– I don’t owe it to anyone to have a good time while travelling, and I don’t have to pretend like I had the time of my life, even though it is a wonderful opportunity and privilege. #firstworldproblems

So, yeah. It was a complicated week. Weirdly enough, despite everything, I think Paris was my favourite place that we visited on our trip. That’s how cool a place it is, even though I was straight up dead inside I still enjoyed being there. So just imagine how great it would be for a real live person to visit! My video sums up what we did on each day, and I have a whole lot of photos to share…