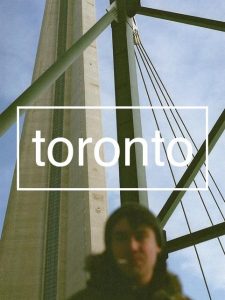 A couple of weeks ago I went on a weeklong vacation to Toronto to visit Nick—I just got the film I shot there developed, so I figure it’s time to write a retrospective.

My flight from Vancouver to Toronto left at 9:40 AM. After a four and a half hour flight I touched down at Toronto Pearson International Airport, where the daughter of a friend of my mom’s picked me up and drove me to downtown Toronto, to Nick’s university dorms, where I was staying for a week.

I stared out the car window as we sped down the highway and couldn’t help but notice how flat Ontario is. In Vancouver there are mountains in the horizon from almost every direction you look. The sky in Ontario is so vast, so endless in comparison. The only things that made the sky seem smaller were the buildings of downtown, tall pillars of light against the setting sun, then, against the night. It was beautiful.

Once we arrived, I got all my stuff upstairs, into Nick’s dorm, then we headed out for dinner. I’d woken up late that day and hadn’t even eaten before I got on the plane, so eating dinner that night was probably one of the most satisfying things I’d ever done in my life. We wandered around for a little while afterwards, but it was something like -33 with windchill, so our excursion didn’t last long, but we were both just so excited to be there, to be alive, it didn’t matter.

This is by far the day I took the most pictures. I was carrying around my iPhone, a Freedom 101 (which is essentially a disposable camera), and a Pentax K-Me pretty much the whole trip, so I have a loooooot of pictures.

We woke up, ate breakfast, and went out to explore Kensington Market. It was cold, but if you were in the sun and facing away from the wind, it was pretty nice out. I couldn’t ignore the sniffles I have to make every five seconds though, a downside to the chilly weather. 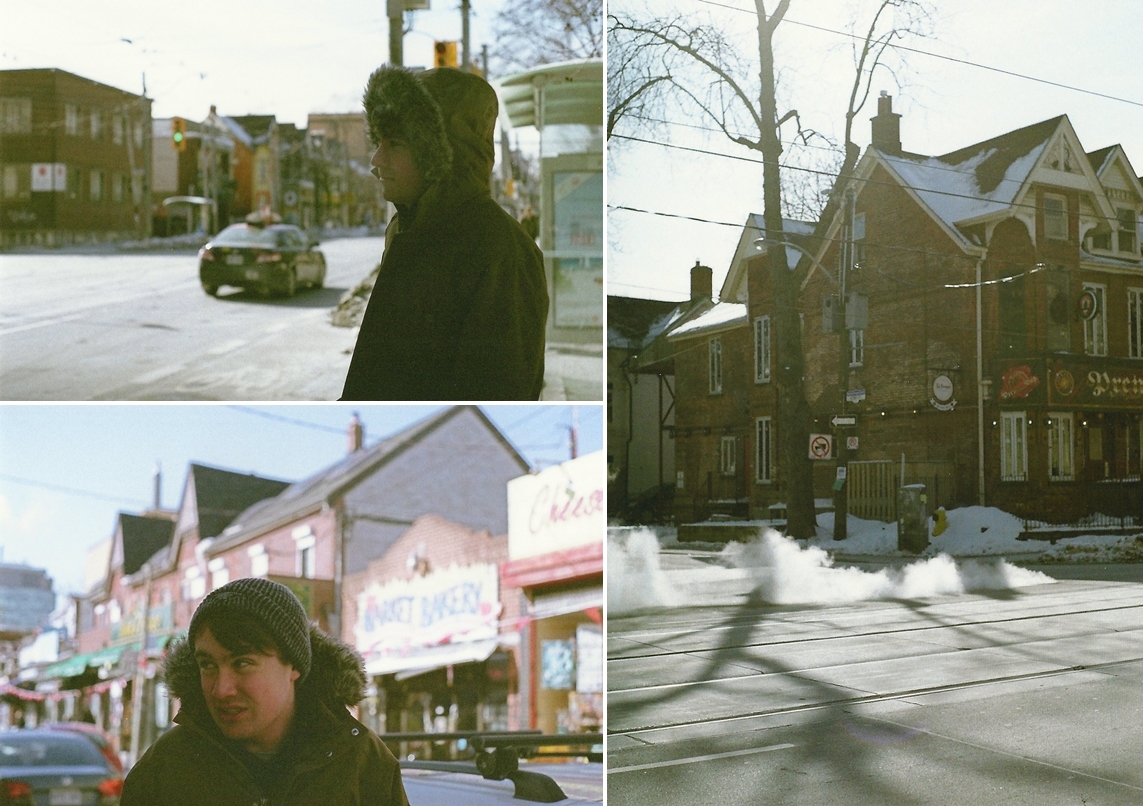 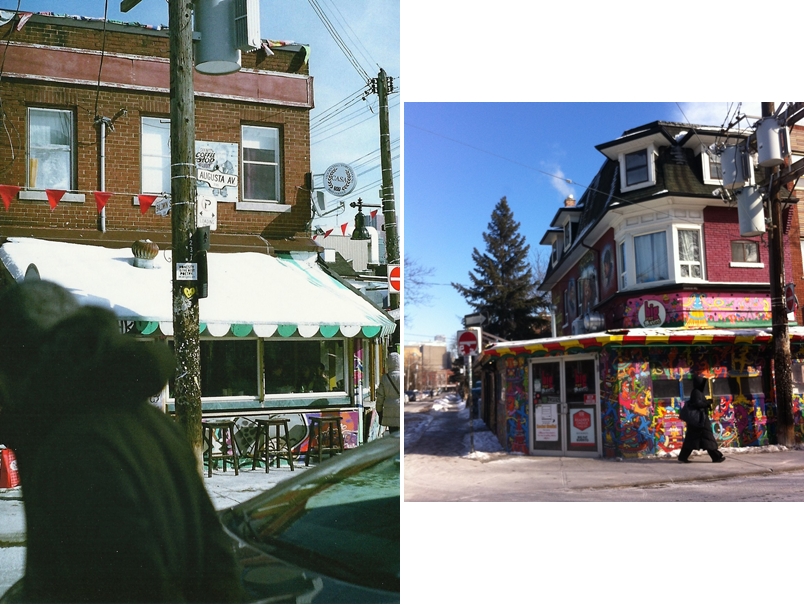 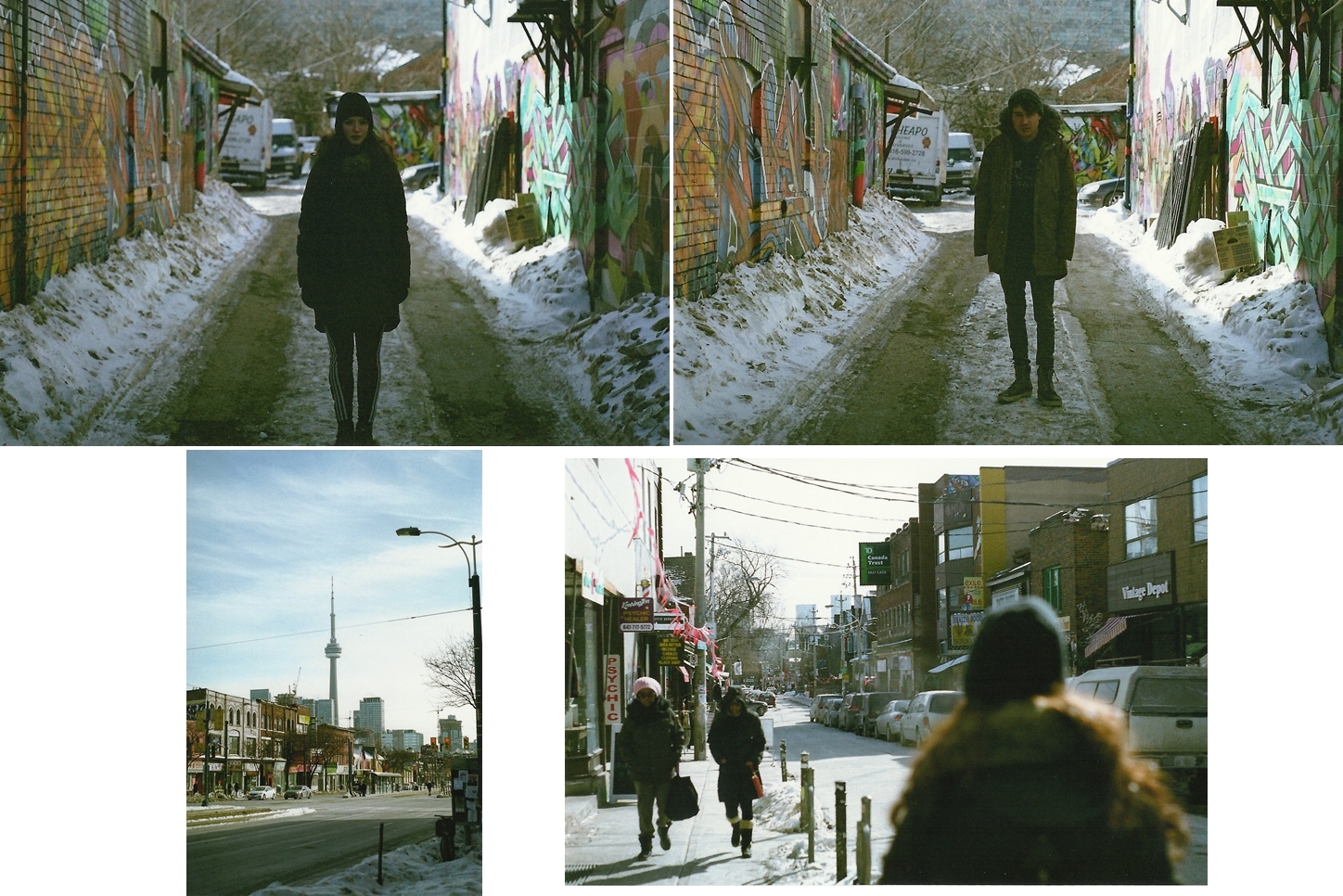 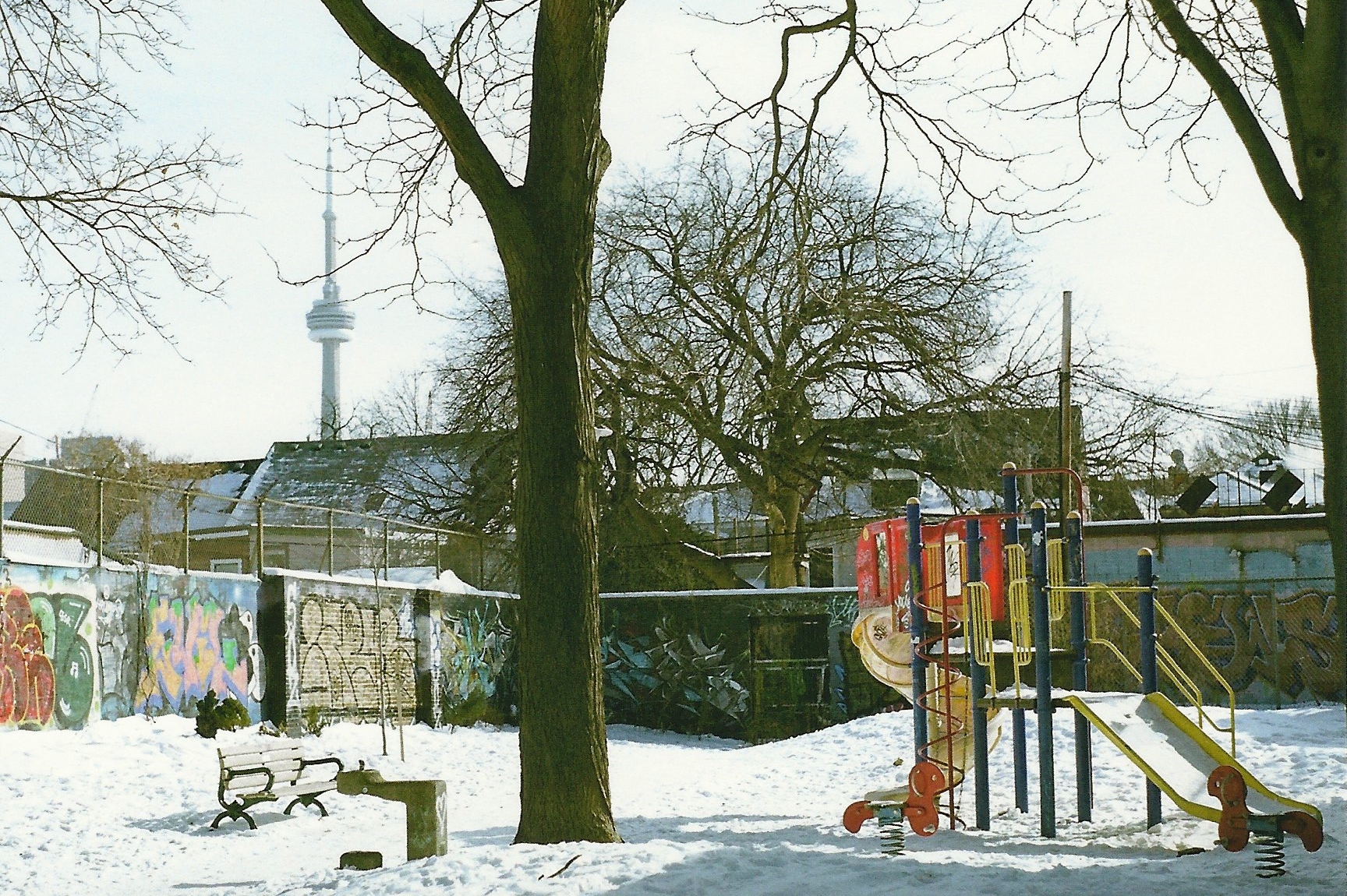 Once we explored enough and were satisfied, we grabbed lunch, then we decided on a whim to head to the Ripley’s Aquarium of Canada, like true tourists. Nick wasn’t exactly sure how to get there, but he figured it out. The walk there was really nice—Toronto is so full of beautiful, tall buildings, I’m sure my constant “THIS PLACE IS SO TALL” comments throughout the week weren’t annoying to Nick at all. Vancouver is by no means a city with short buildings, but it is not on Toronto’s level. 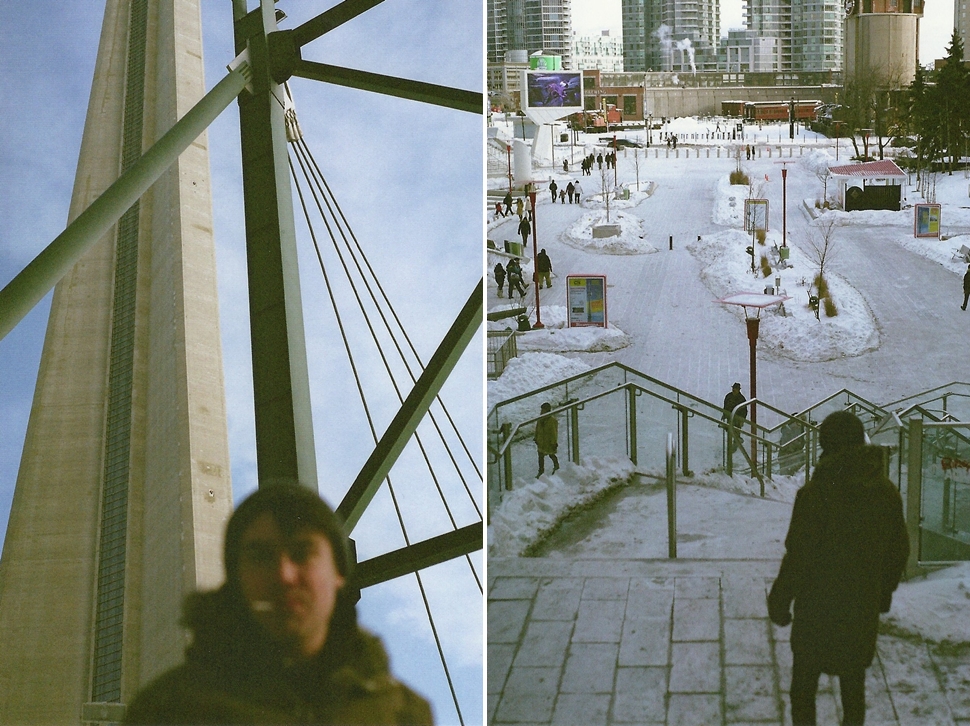 The aquarium was crawling with families and small children, moreso than aquariums usually are, and Nick and I couldn’t figure out why it was so busy until we remembered that it was Family Day in Ontario. Family Day is a made-up statutory holiday that I think (I may be wrong) is only celebrated in a handful of Canadian provinces, just to give people an excuse not to go to work or school. And all these people decided to go to the aquarium. It was pretty funny, actually.

This aquarium was insane. It was so full of beautiful things—I have a deep love for aquariums and this one blew my mind. There was a point where you could actually walk through a hallway in a huge tank, surrounded by fish on all sides. 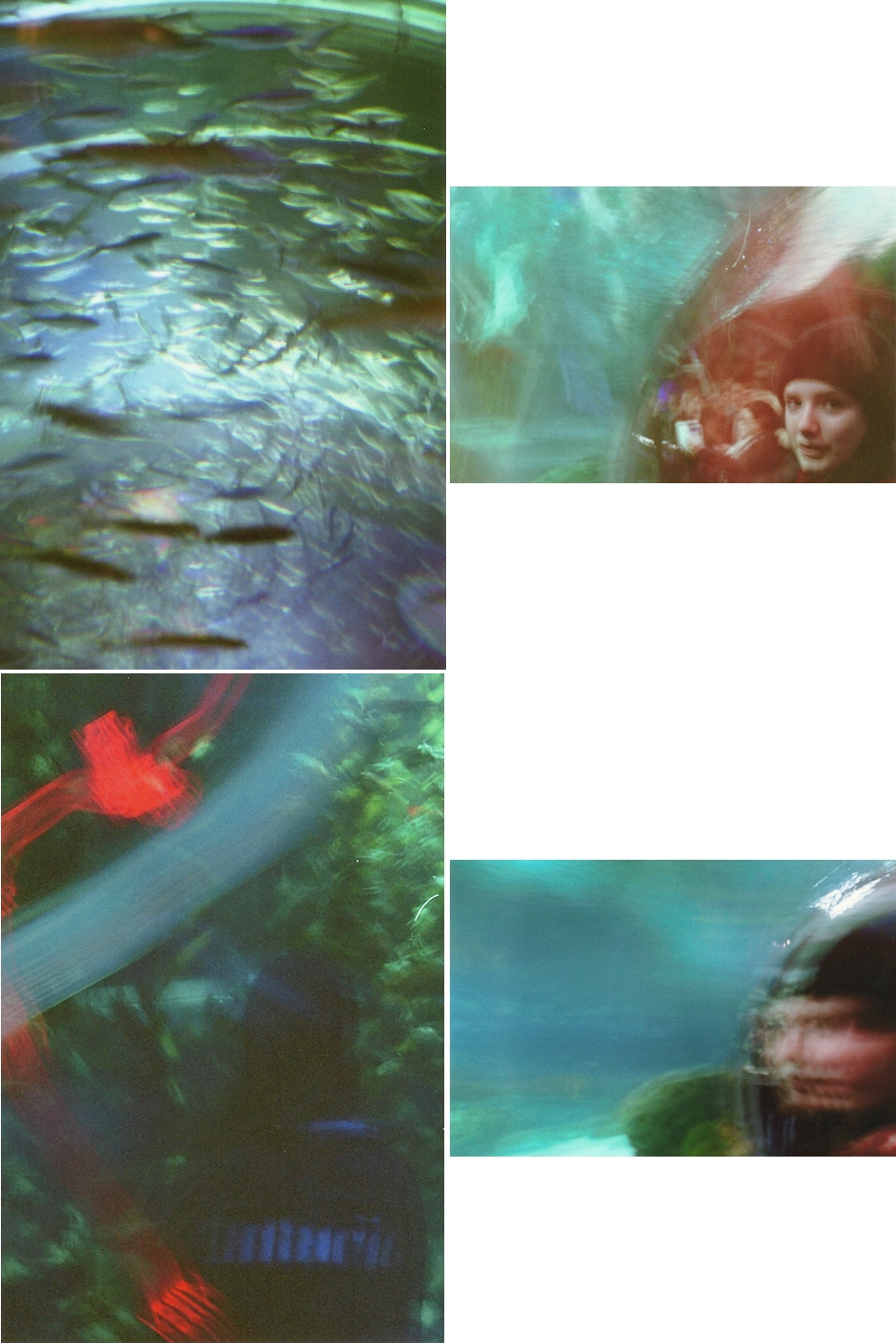 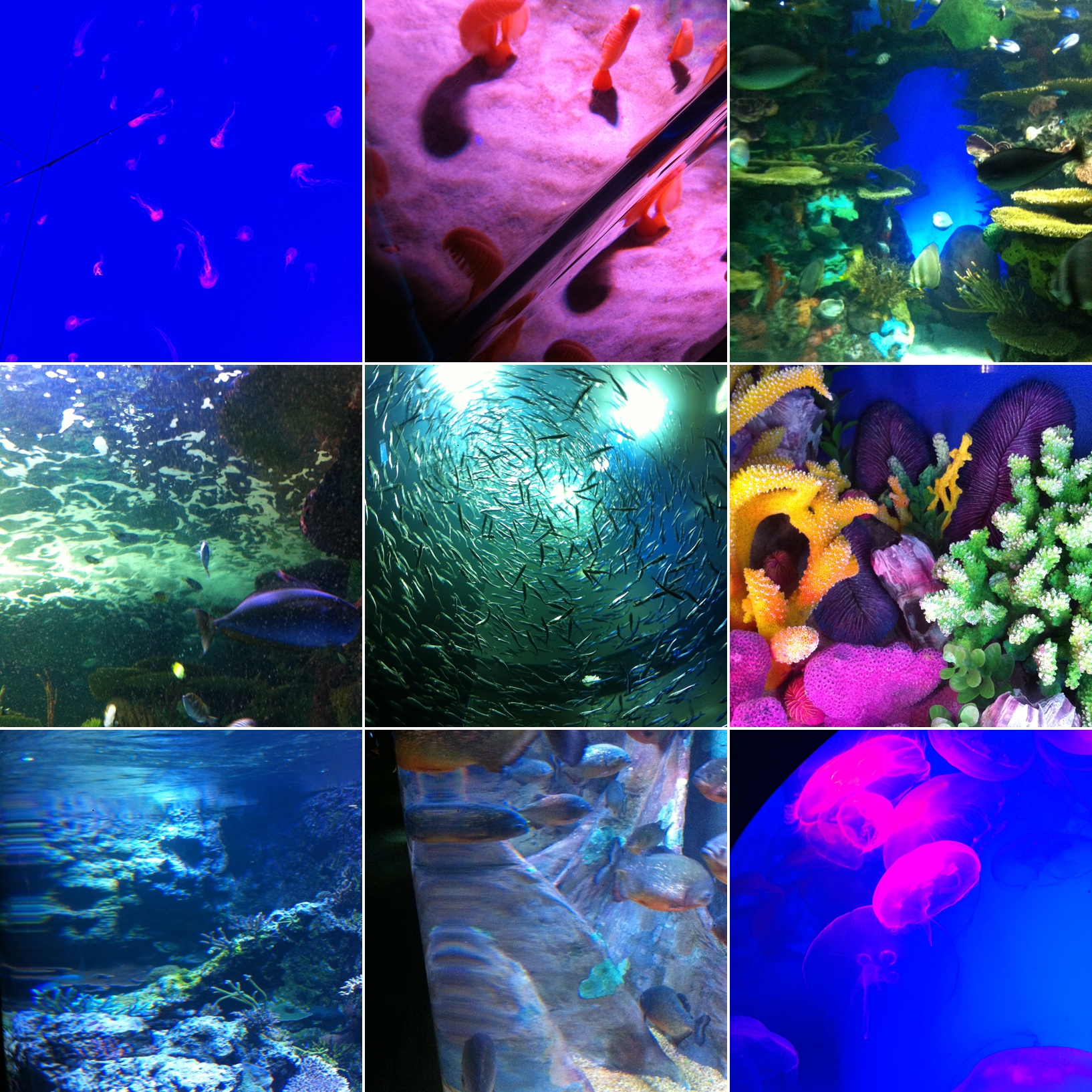 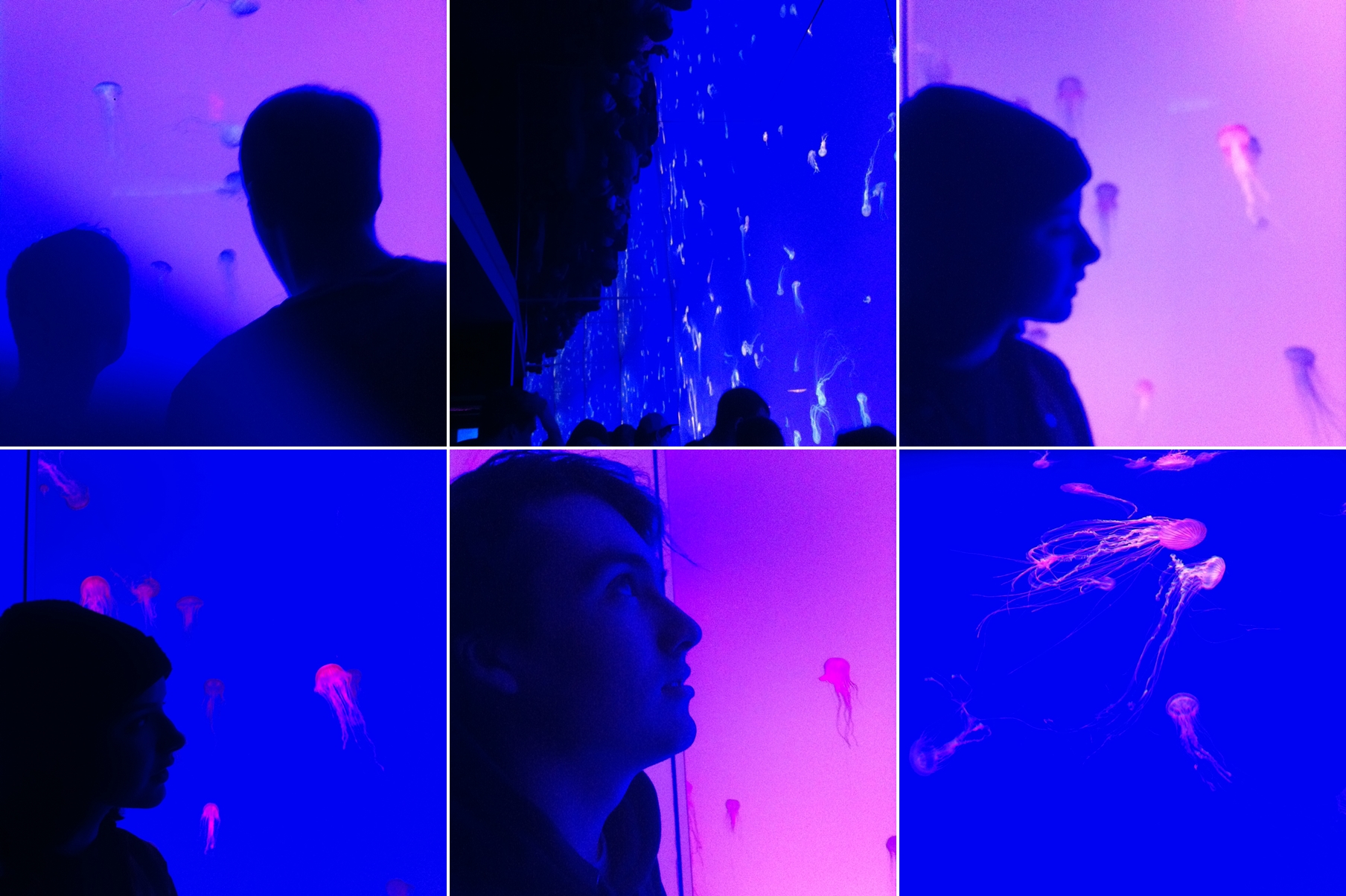 Afterwards, we took the long way back to Nick’s dorm as the sun set, exploring this city that I’d never been to before in the cold night. It was magical. I know I describe a lot of things as magical, but that’s because the world is magical and full of magical things and I appreciate them and their existence. We crossed a bridge and got a great view of the city and I fell in love, a little. 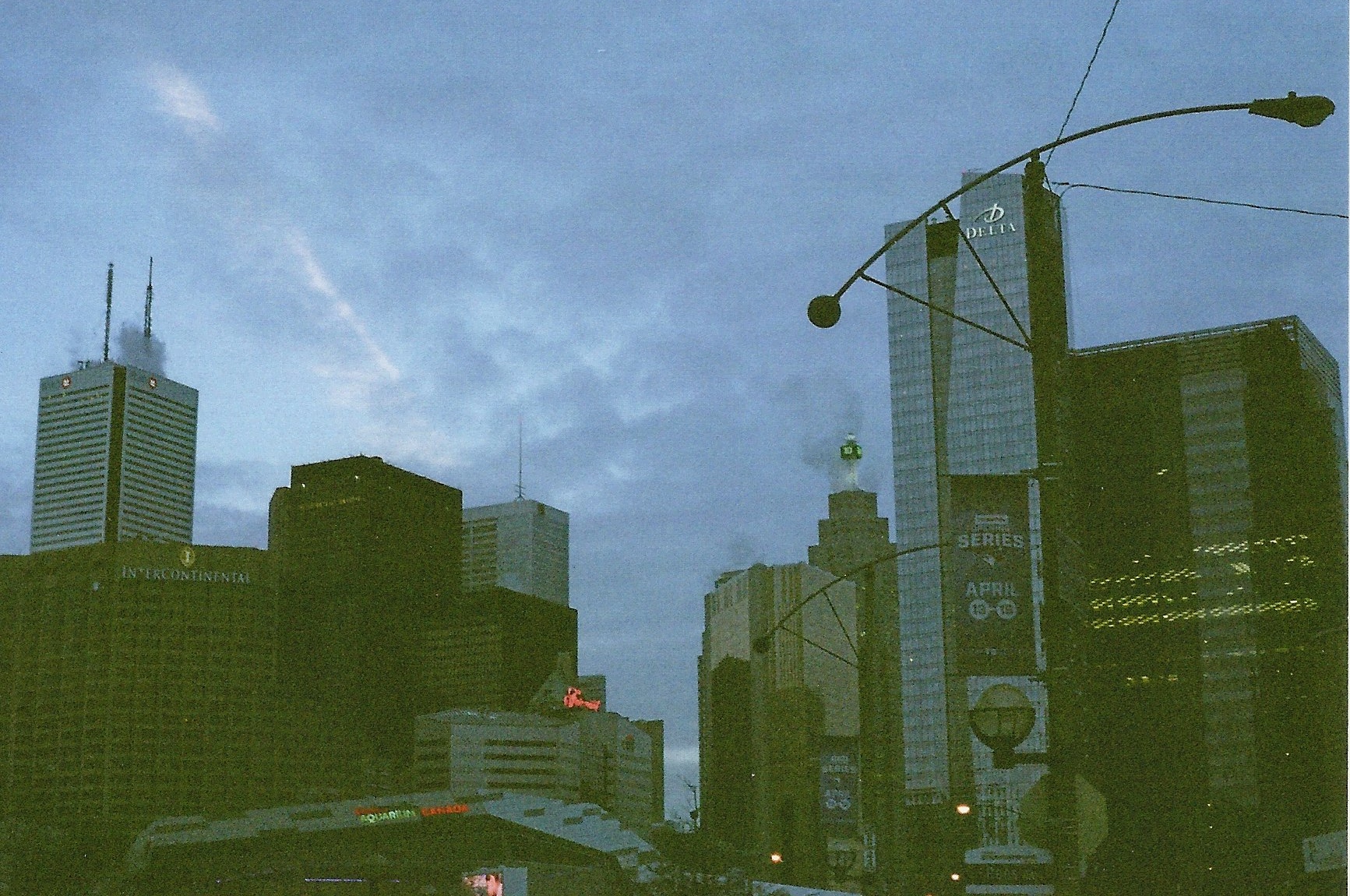 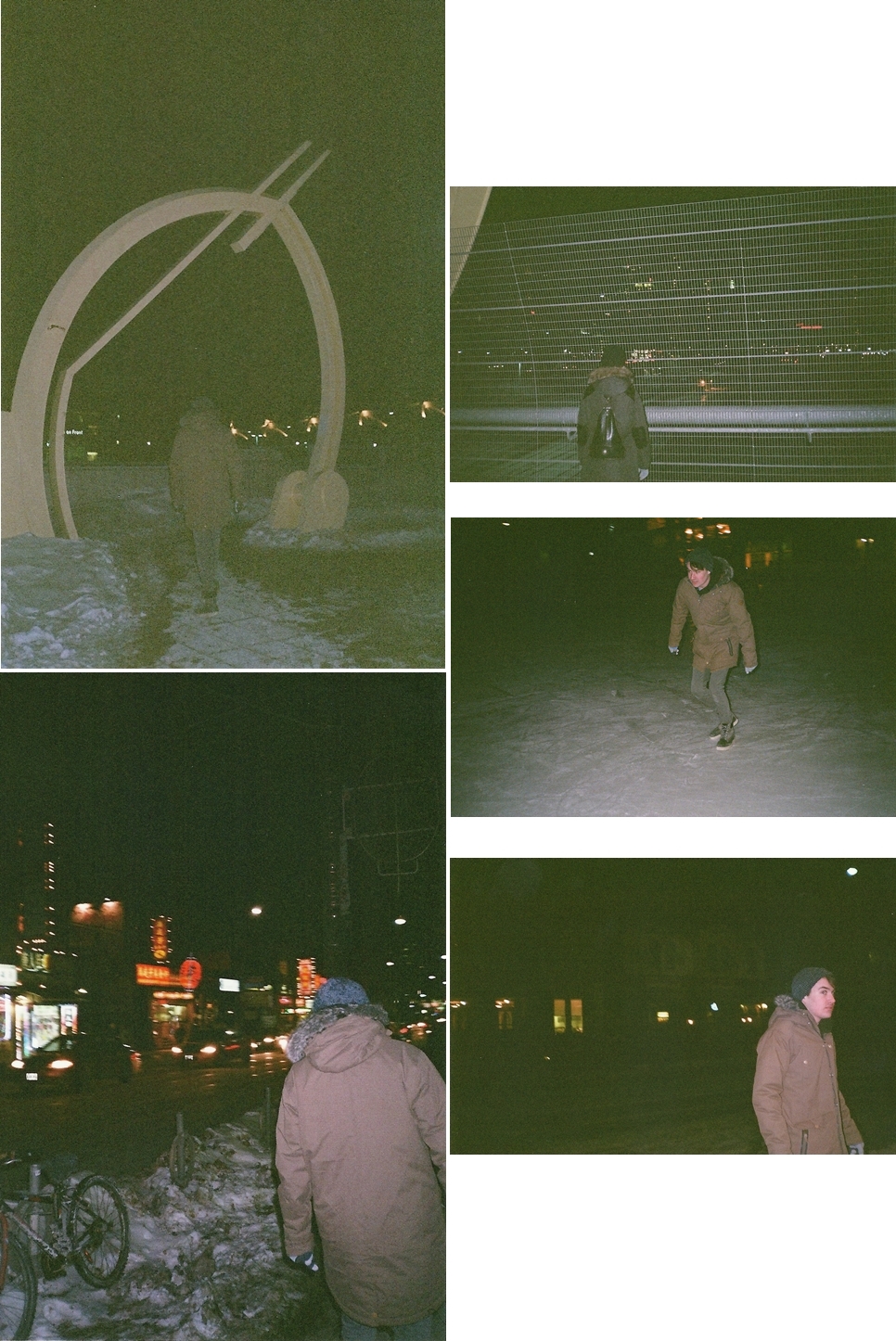 On Tuesday we explored Queen West and went shopping. I bought some nice clothes and Nick and I meandered the many unpronounceable street names in Toronto—Spadina is pronounced “spa-die-nah,” not “spa-dee-nah,” Yonge is pronounced like the word “young,” not “yonje,” (admittedly Yonge Street is one of Canada’s most famous streets, so like, I should probably have known that already, but WHATEVER), Dundas is pronounced dund-ass, not dund-us… Ridiculous. Maybe it’s just because I hail from a city that all the locals call Vang-couver despite it being spelled Van-couver? Am I just not proficient in English anymore?

I found out that Tuesday that I’m definitely not proficient in opening doors. If it was a pull door, I would push it, and vice versa. This inability to enter buildings haunted me throughout the week and became a running gag with Nick. Anoter new realization: diagonal crosswalks terrify me. The diagonal crosswalk at Yonge-Dundas Square was SO CONFUSING. I DON’T LIKE IT. GET IT AWAY FROM ME. I was clinging to Nick for dear life. 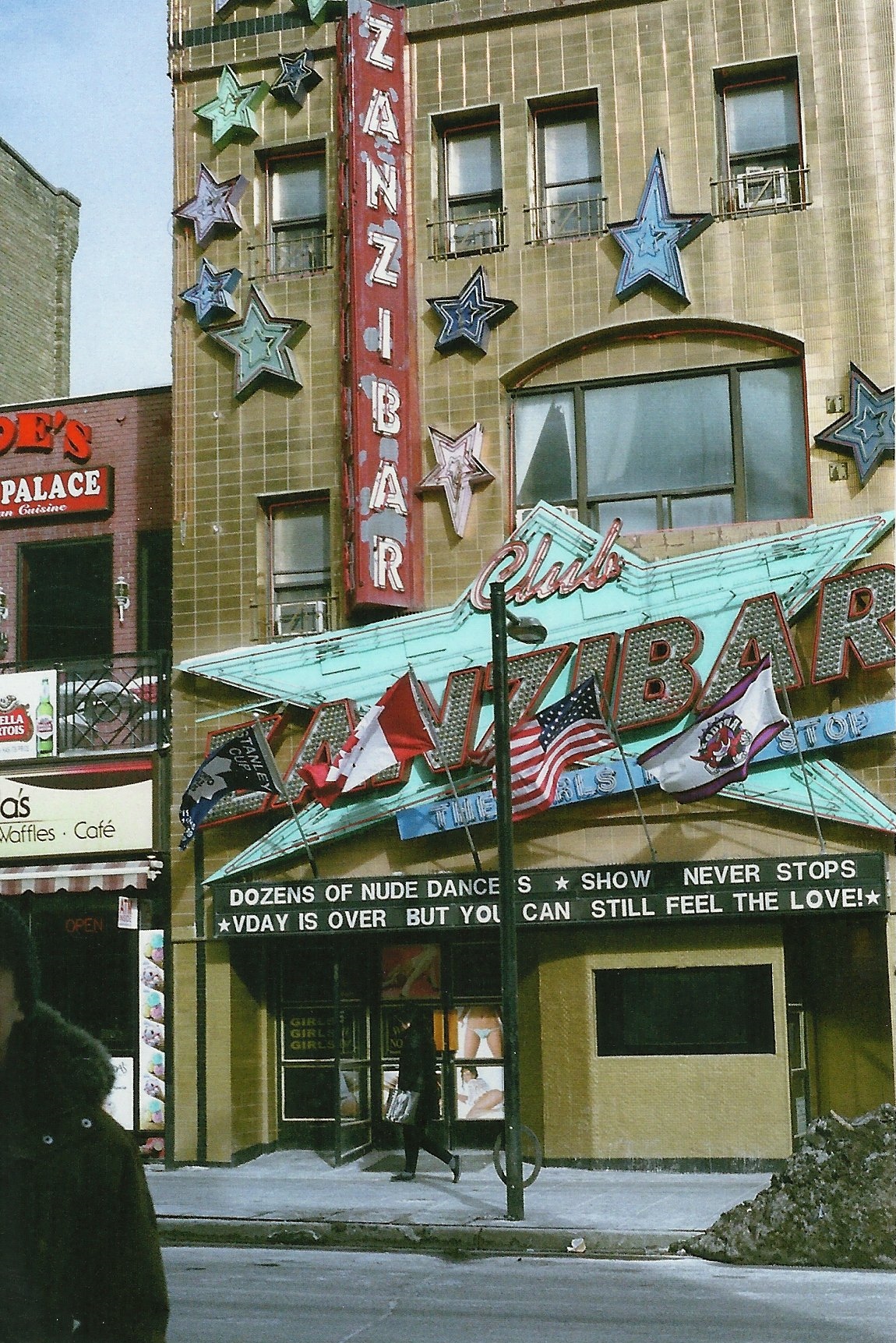 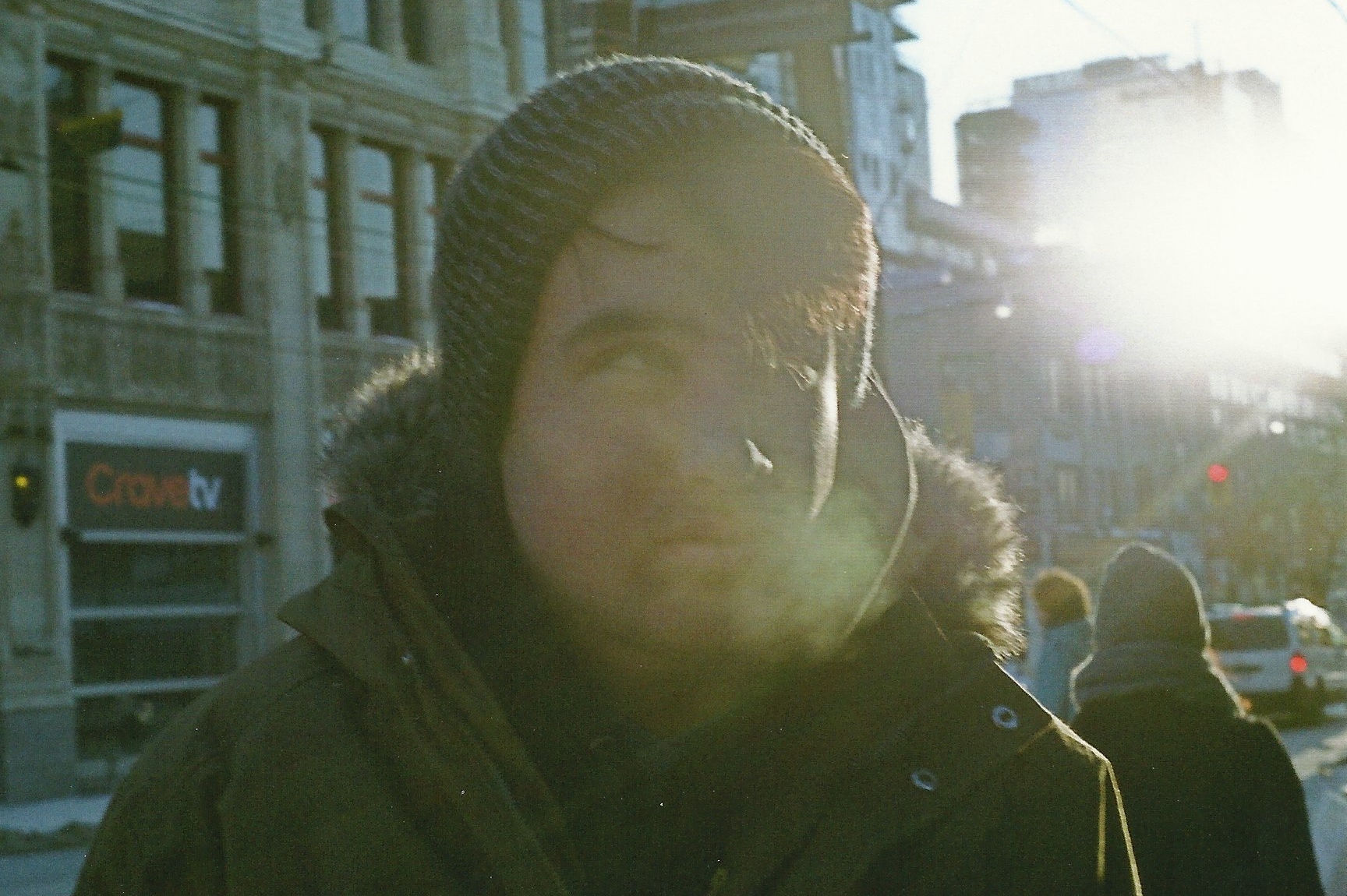 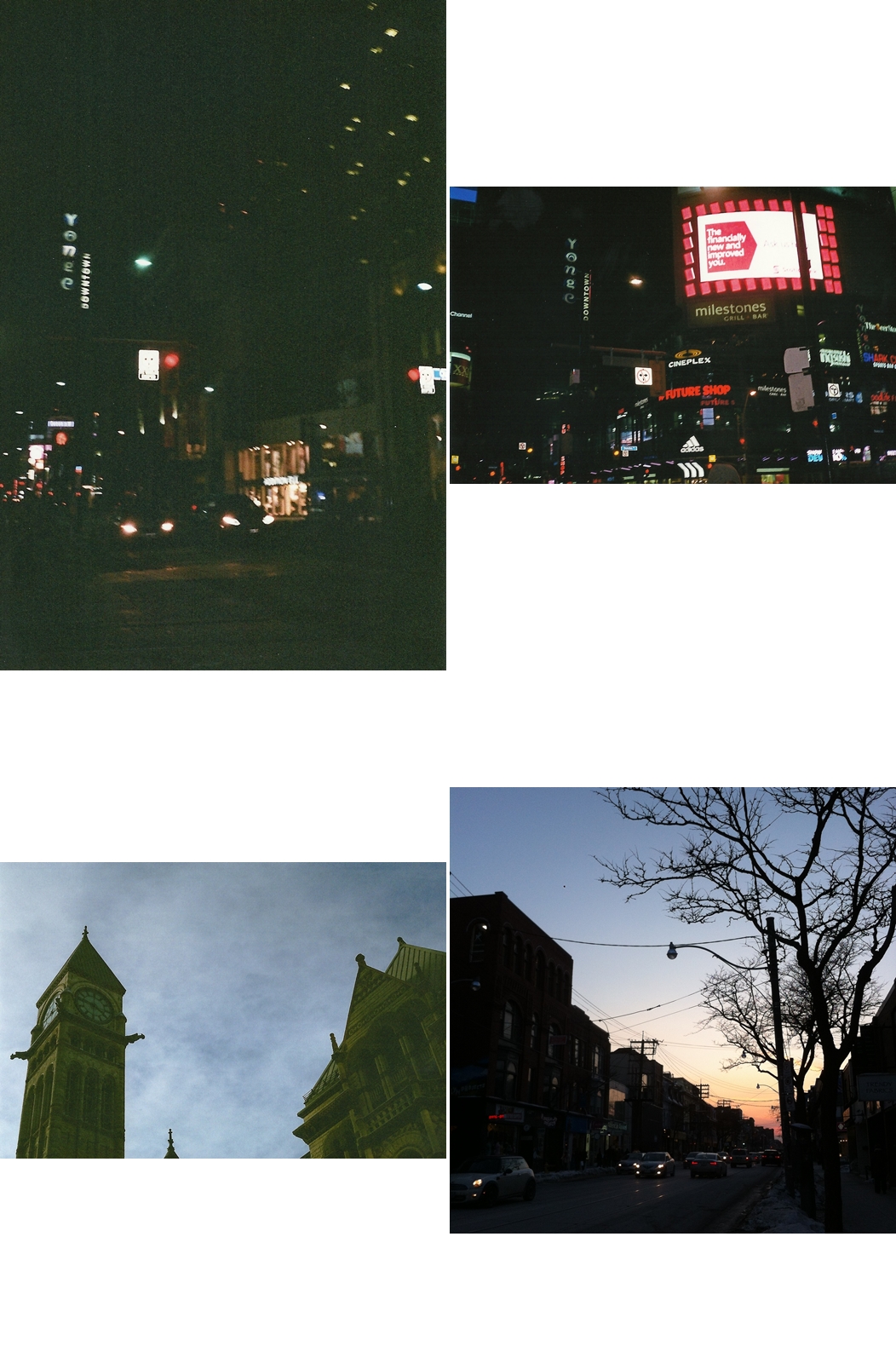 At 9PM we went to a small theatre that was showing A Girl Walks Home Alone at Night, an Iranian vampire movie Nick and I had both been wanting to see. It was the only theatre showing it in Canada, and it was being shown for a limited time, so I really lucked out. Once it was over we walked to Fran’s, a sort of retro diner (Nick described it as cheaper/better Denny’s, which I agree with), and discussed our thoughts on the film before heading back home.

We spent Wednesday with our friend David, who went to high school with us but is now attending the University of Toronto, and he showed us around the campus for a little before we went to get Korean food. There’s so much brutalist architecture in Toronto, it made me so happy. I love brutalism with a passion.

At the restaurant he showed us the Android app he was about to release—it’s released now, and you can  and should download it—and it was just so nice to see him succeeding, doing cool things with his life. I felt (and feel) that way about Nick, too. David mentioned stuff about missing all his friends in Vancouver, and I mean, having people you care about move away is so hard to deal with, but watching them succeed and getting to cheer them on makes it tolerable. I can’t possibly be bitter about anyone moving away from home when they’re happy and flourishing. It’s something really wonderful to watch.

After eating, we walked around Yorkville, the fancy pants area of downtown Toronto. 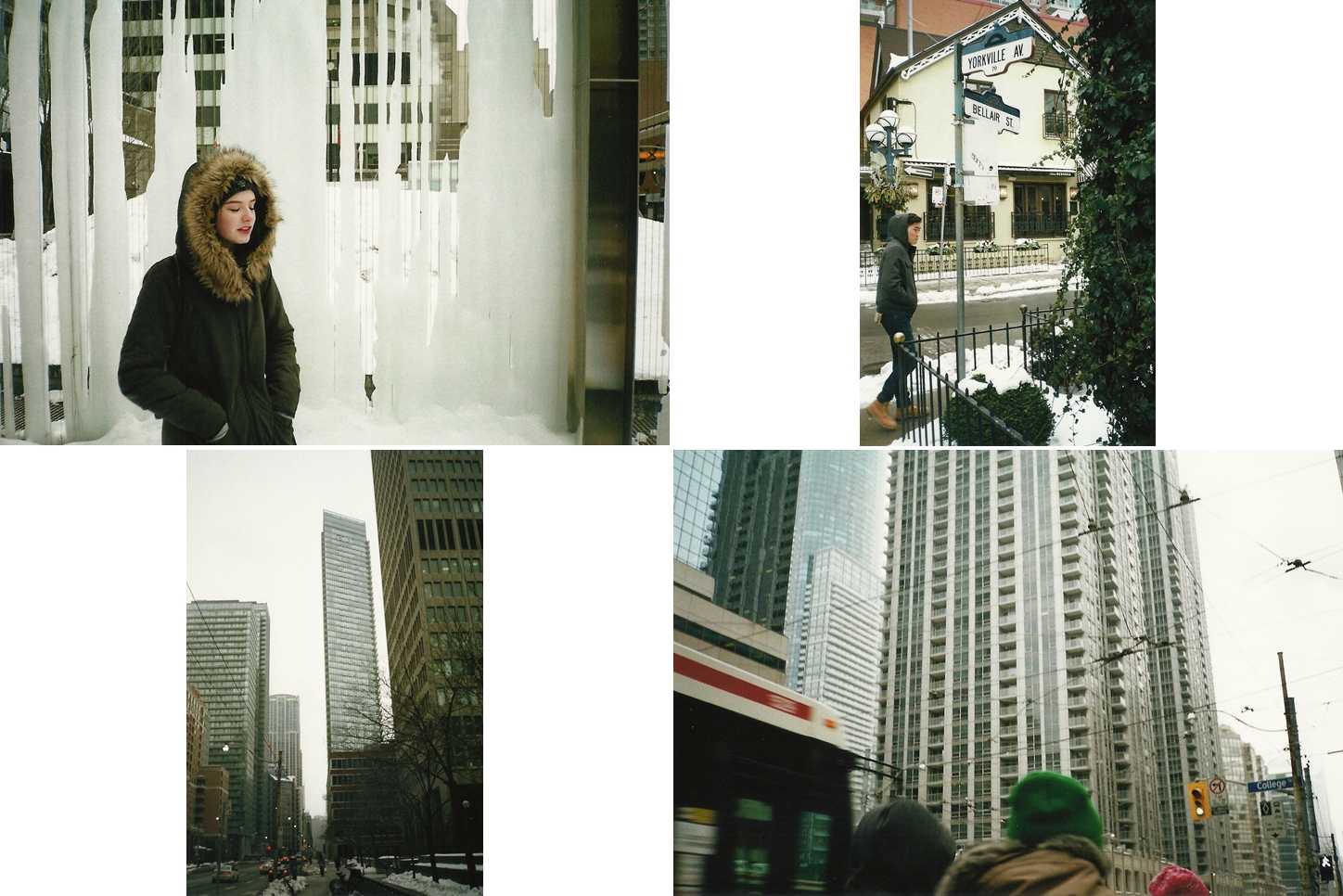 Earlier in the week when we’d been deciding what we should do while I was in town, we saw that everywhere is anyhere is everything is anything, a Douglas Coupland exhibition that was shown at the Vancouver Art Gallery not too long ago, was being shown at the Royal Ontario Museum, and by chance, we passed by the ROM as we walked back in the direction of Nick’s dorm and it had Gumhead in it. Gumhead is a piece of art by Douglas Coupland that was installed in front of the Vancouver Art Gallery over the summer, and it was so surprising and pleasant to see. Home really wasn’t that far away, after all. 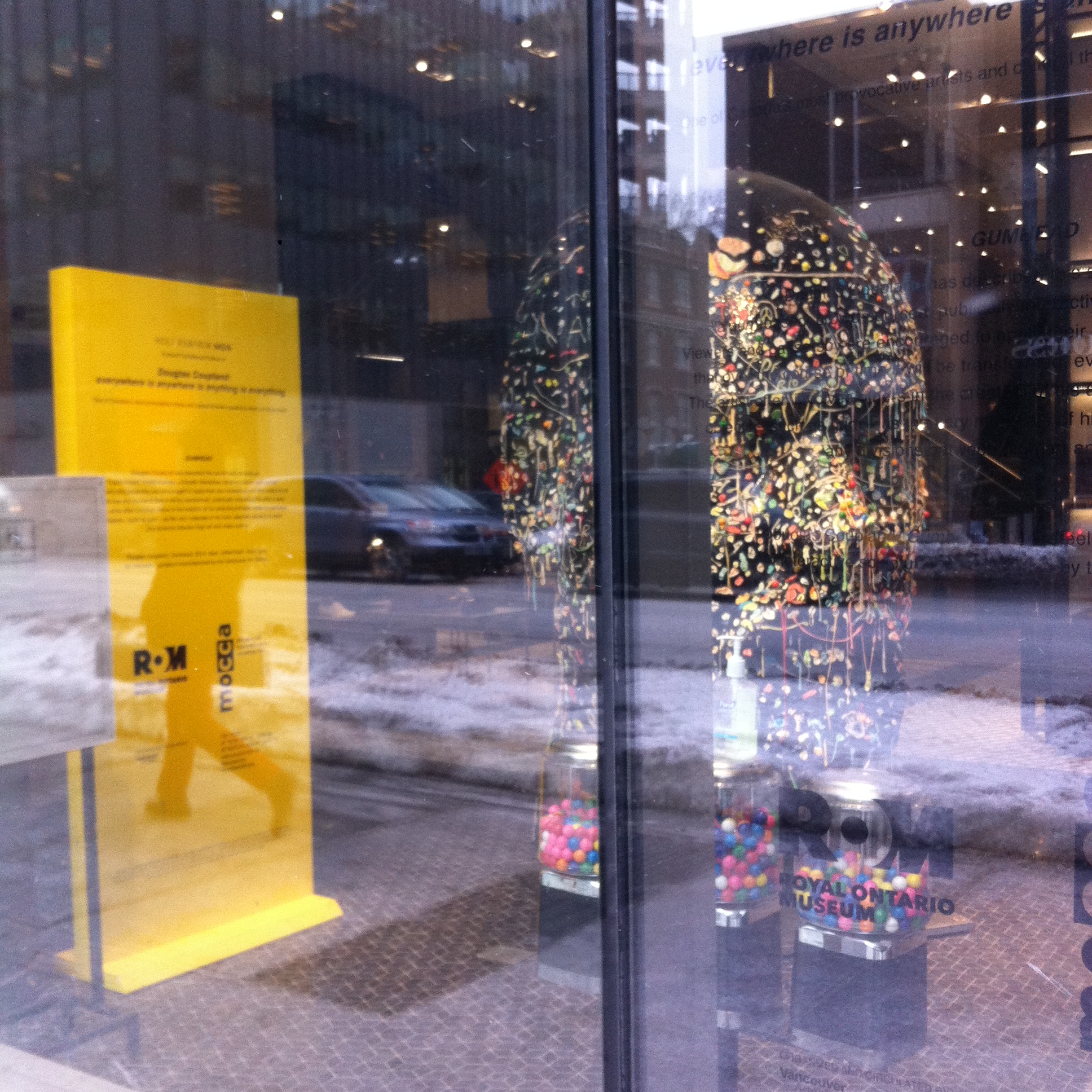 After a late start to our day, we went to the St. Lawrence market (like actually, just went to it, we didn’t buy anything, Nick just said it was a tourist thing to do, so we did it, hah), then to the distillery district. We weren’t out for too long because it got really windy and really cold really quickly, but we had time to look around and take some pictures and check out a few small art galleries. Then we took a cab back home even though it was only like ten blocks away because we were SO COLD. 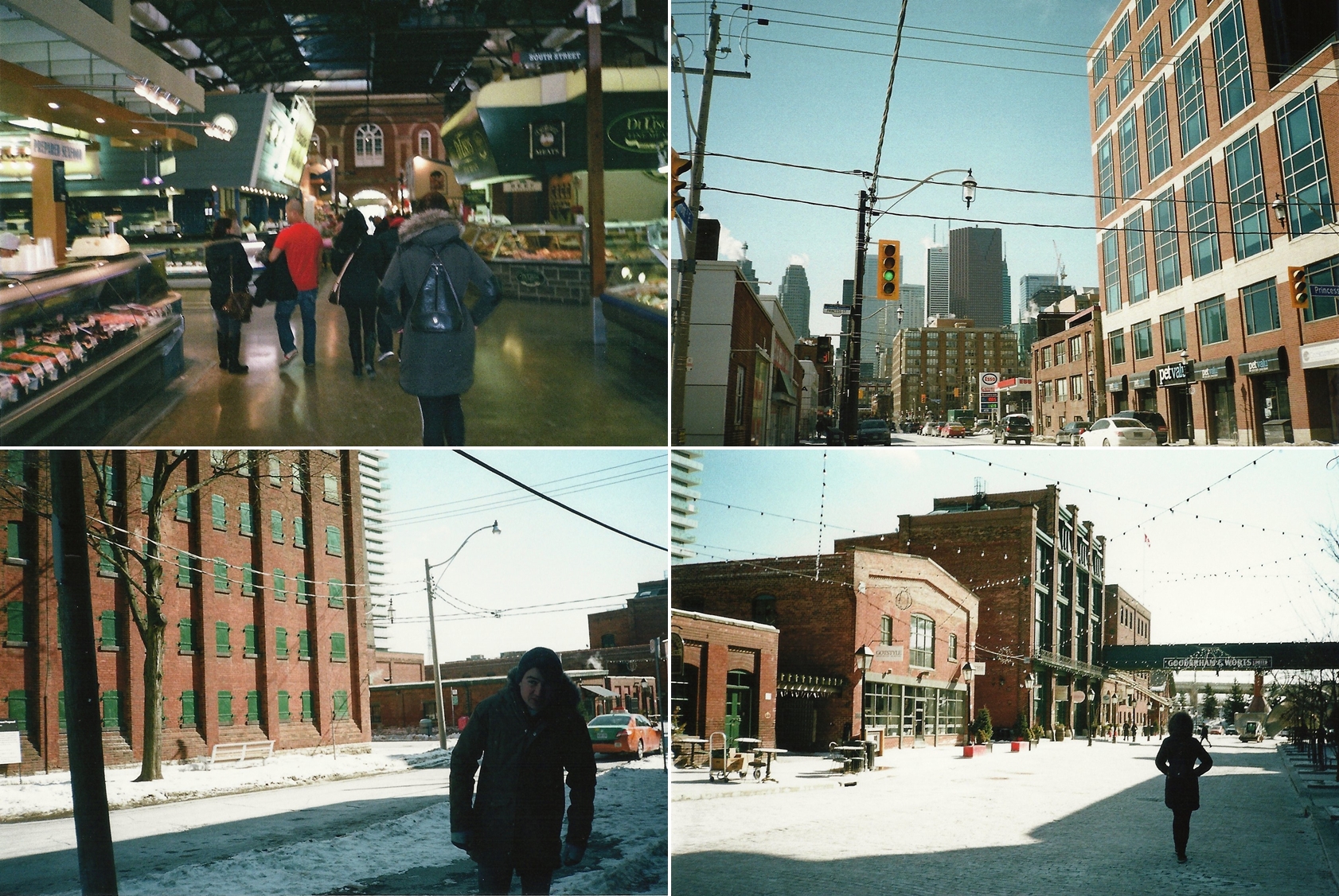 We went back out at around six for a fancy Italian dinner, then walked back home, appreciating the beauty of the city at night.

Friday was the day I’d been looking forward to all week: the day we went to the Art Gallery of Ontario to see the Jean-Michel Basquiat exhibition. I love Basquiat, his work, his story, what he stood for—I can’t even tell you how excited I was to see his paintings IN THE FLESH.

Before heading over to the AGO, we went to October’s Very Own, a store started by Drake, because Nick wanted to check it out. On the way there he said he’d never actually been that far West on Dundas before, so it was a little adventure for both of us. We then walked to the AGO, appreciating the neighbourhood and all the cool street art within it.

Once we got into the art gallery, we decided to save the best for last, and started exploring the whole gallery together. 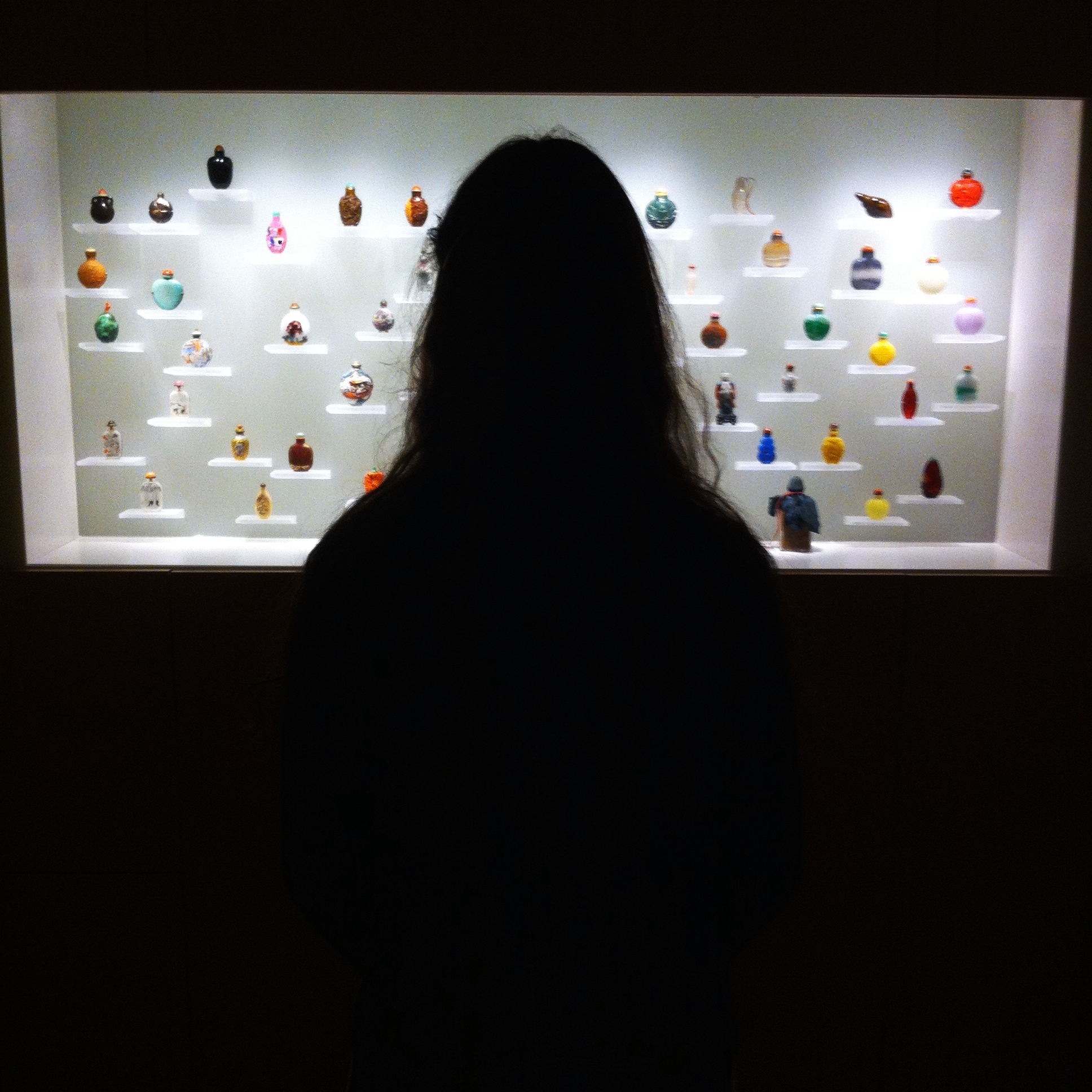 Then we saw Basquiat. I cried. It was amazing.

We made the mistake of not eating before going into the gallery, so we were suuuuper hungry by the time we left. We left, on the hunt for some food. 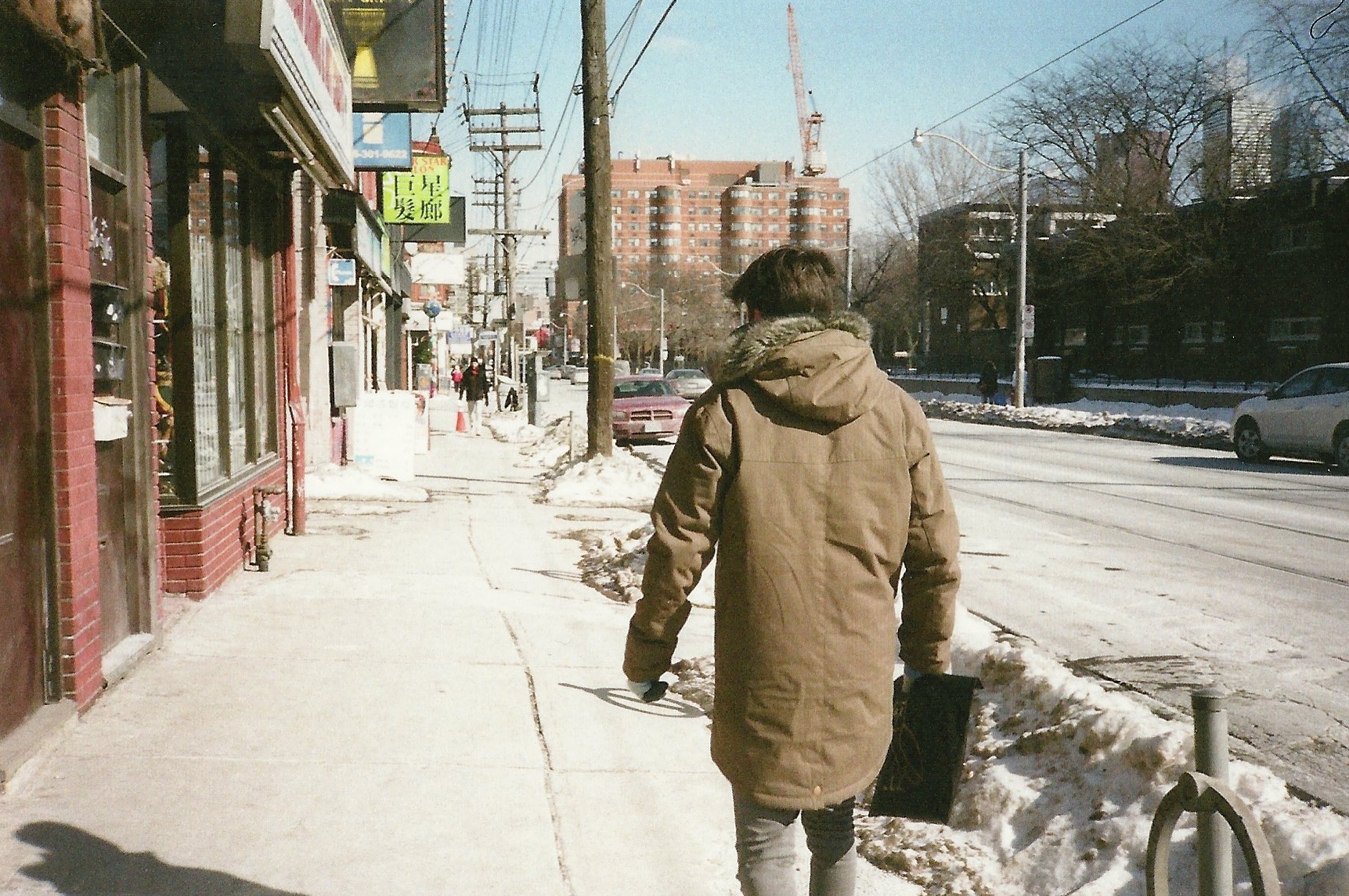 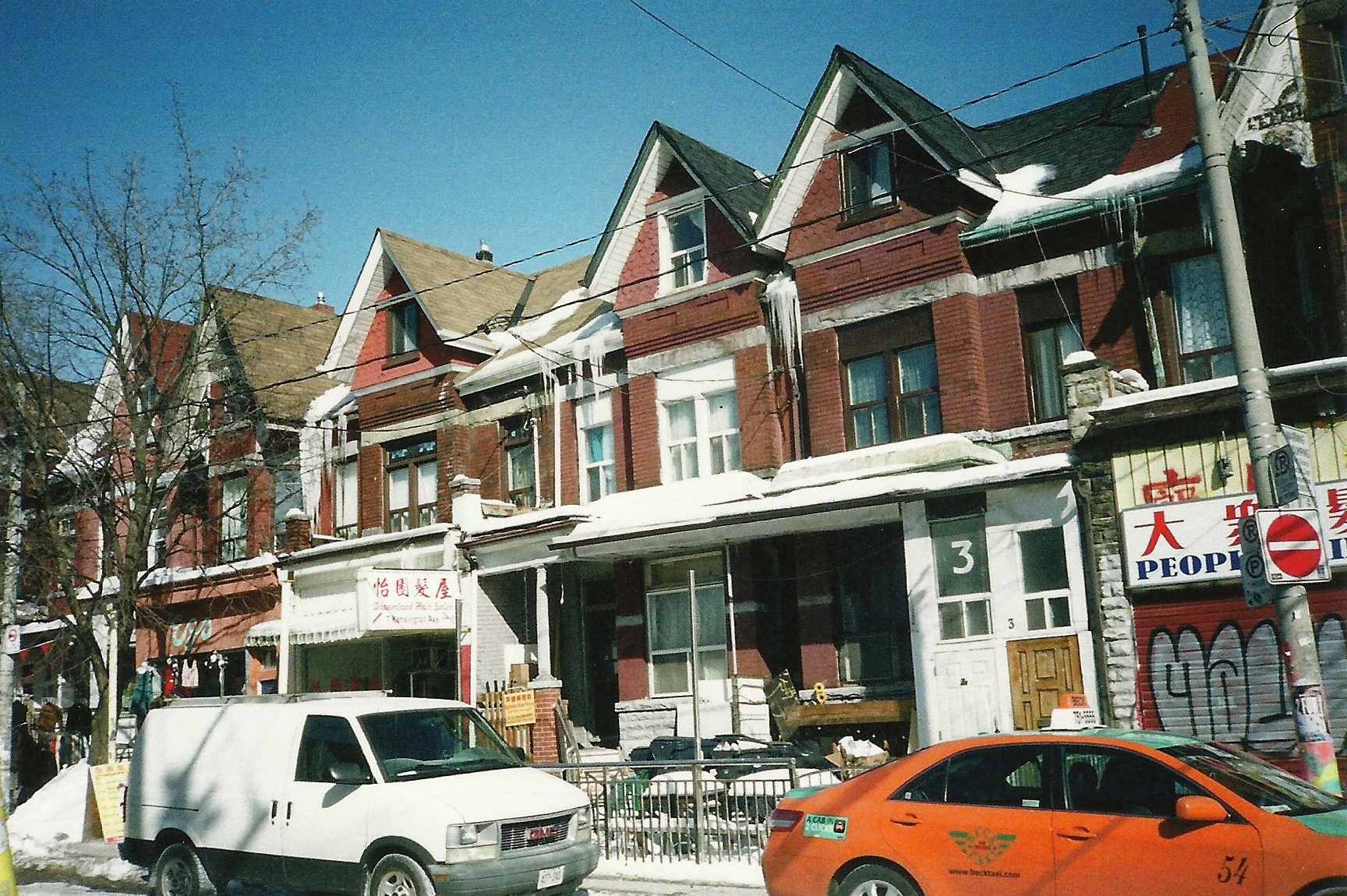 Then we spent the end of our last full day together in Toronto unwinding in Nick’s dorm with a friend of his. Nick DJed a little, messing around while this light he owns projected colours on the ceiling. At approximately past-my-bedtime o’clock, we went to a pizza place called Big Slice, which, true to its name, sells pizza in huge slices, because according to Nick you basically aren’t allowed to go there unless it’s late or you aren’t sober. 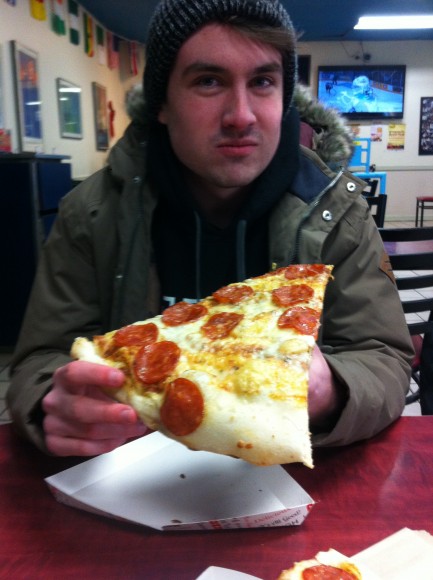 At approximately past-my-bedtime o’clock, we went to a pizza place called Big Slice, which, true to its name, sells pizza in huge slices, because according to Nick you basically aren’t allowed to go there unless it’s late or you aren’t sober.

Then we were stuffed and sleepy, and we went to bed.

We woke up to snow—the first time that week it had been warm enough to snow (only -7, WOW, SO WARM). We spent our morning in, talking while I packed, saying our goodbyes. 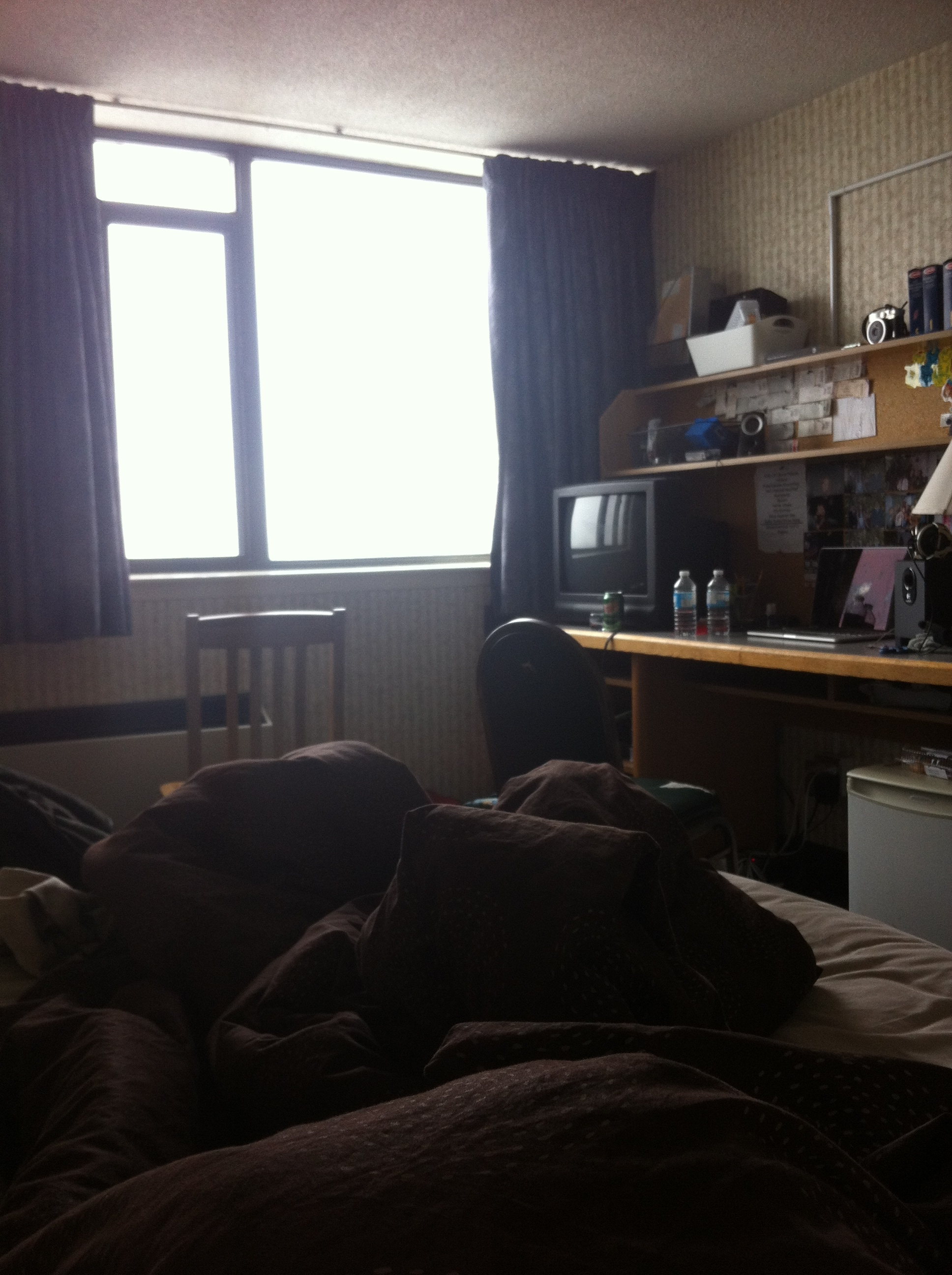 Then a friend of my mom’s arrived to drive me from Nick’s dorm to the airport. She and her daughter, who’d driven me from the airport to Nick’s dorm at the beginning of the week, had never met me before and just did this out of the kindness of their hearts, how nice is that?? The world is so great.

My plane took forever to take off, and the sun set as we were still on the ground. I was excited to go back home for many reasons (the prime one being that in Vancouver, I can go outside without my nose getting all sniffly), and yet sad to say goodbye not only to Nick but to this wonderful place where he lives now. As the plane finally came roaring to life and the clouds rolled over the city as we rose into the sky, I kept thinking that I’d go back in a heartbeat.