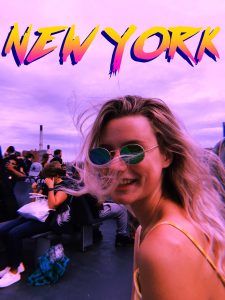 This summer, before returning to the hellscape of post-secondary education, I’m spending a month in Montréal and a month in Toronto. While I’m living in Montréal, I thought it might be nice to dip away for a couple days to New York– a city that feels very far from my hometown of Vancouver, but only a hop, skip, and a throw (or an 8 hour bus ride, such as it was) away from Montréal. My longtime friend (and current roommate, shouts out to him for hooking me up with a spare room in he and his friends’ place) Charles was down to join me, so we set about planning our lil weekend away.

When I was 14 and had never really been anywhere yet, safe for Disneyland a couple times with my family, the city seemed to slap me in the face with its bright lights and busy streets and hustle. Even having grown up in a city, New York seems to have the effect of making you feel like a bright-eyed naive little ant in The Big City for the first time. New York City (pop. 8.5 million) is admittedly not on the same scale as Vancouver (pop. 3.4 million, if you count Greater Vancouver), but I’ve gotten some travelling under my belt since I was last here, including to other global cities. I expected to be less star-struck, and I was, but I was instead struck by how weirdly similar I felt being in New York as being in London. Not because they are particularly similar (they aren’t), but just because both have so much history, factual and fictional.

It’s amazing the amount of places you know in London and New York without knowing them. Charles and I walked through Central Park to the Metropolitan, and found ourselves almost by accident on 5th Avenue. We know 5th Avenue, of course, we’ve heard about it, but didn’t realize we would actually, like, be on it. It wasn’t part of our plan. It was just a place we knew without knowing. In London, my sister and I freaked out when we realized we were on Fleet Street (and kept an eye out for any barbers over restaurants, haha).

New York is no mere location for stories that take place there, it’s its own character. So it was interesting getting to know a place I sort of already knew, like meeting a favourite actor or something.