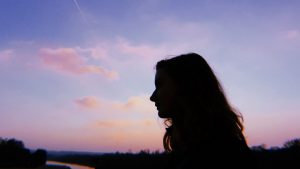 Atlas and the Sky, or Wedding Rings Like Shackles

Video transcription after the cut.

ATLAS AND THE SKY, or WEDDING RINGS LIKE SHACKLES

We’ll start at the end: I fucked up, I’ll give him that. But, of course I did, I’m a human being. He fucked up too, because of course he did, he’s a human being. But you wouldn’t know that, based on any of our conversations that took place over the next while. I apologized because it was the right thing to do; I had been careless, unkind. An apology was owed. I continued to apologize because I was then being emotionally abused, my misdoings blown out of proportion, used to gaslight me into believing this narrative wherein everything that had ever gone wrong between us was blood spilled on my hands, mine alone. I was desperately scrubbing them clean, not realizing I bloodied them anew in the process— skin rubbed raw and blistered: “I’m sorry,” after “I’m sorry,” after “I’m sorry.”

I broke myself in half bending over backwards for him. And yet each and every one of my attempts at kindness and reparation were seen as being part of some nefarious scheme to manipulate him. How could he think so low of me, after everything? How could he purport to know me so well but misunderstand me so thoroughly? If I could just make him understand, the problem would go away. I had to do something. I had to prove him wrong. I needed to, because I needed him. The onus was on me, anyway, wasn’t it? I was to blame for everything, anyway, wasn’t I? I was certainly being made to believe so.

I am overly empathetic and I stupidly try to see the good in people, especially the people I am closest with, even when they’ve proven to be unworthy. It took me far longer than I’d like to admit to see that there is no way to prove wrong someone who has deluded themselves so thoroughly. Proving him wrong would require him to A) extend to me the empathy I had extended him, and B) hold himself accountable for his own misdoings, and that will simply never happen. Eventually, months after taking pains to remove him from my life, he deliberately did something so obviously heartless that I felt an unfamiliar hatred towards him, an urge to tell him exactly where he could shove it.

I had an opportunity to assert myself… And I couldn’t do it. And I didn’t do it.

I’m not usually afraid of confrontation or communication—I’m not truly very assertive, but I can usually fake my way through it with the help of some bravado. I realized that night that I was terrified. I knew he would lash out at me, I knew he would make me feel like I was the one in the wrong, like sticking up for myself was a waste of time, and I knew he would deny any of it ever happened then say awful things about me afterwards to our mutual friends. He’d already been doing all of those things for a year prior to this. And still, I was terrified. Around him, I became the absolute worst version of myself: a doormat to be walked all over. I became a version of myself that I hated, because he hated me, as if my chronically depressed ass needed any help finding reasons to hate myself. I finally put two and two together, realizing that, oh. Wow. There’s a word for this: gaslighting. There’s a term for this: emotional abuse.

I remembered, months prior, his best friend telling me that she hoped I’d get an apology one day, because I deserved it. His own best friend was on my side. I wasn’t even on my side. I had gone to her in the first place to ask if I deserved what I’d been put through, because I didn’t know anymore. Every single feeble attempt at assertiveness resulted in my immediately being taken down and attacked, by someone who knew all my softest spots and therefore just where to hit. And no one else was standing up for me, even the best friend. She was only privately on my side, and publicly enabling his abuse. So I had to deserve it, right? The worst part of emotional abuse is that after a while, you believe it.

This is not an essay about My Learning Experience and how it made me A Better Person. It’s been a learning experience, certainly, but I was—for a long time afterwards, and, in my weaker moments, even still—a worse person for it. I overthought. I doubted myself. I found it very difficult to validate myself after being made to feel that I am a terrible person whose opinions and feelings mean nothing. Every single time I used any kind of convincing tone with anyone, I was afraid of coming off as manipulative. I was absolutely made into a weaker version of the person I once was. This inability to assert myself only made me more vulnerable to abuse.

Later, I actually wound up in a second emotionally abusive situation, for essentially the same reasons the first person abused me. Yet again, it was someone I loved dearly and trusted wholeheartedly. It didn’t feel like abuse, not at first. It felt like justified punishment. Just like it had the first time around.

The sole thing that allowed me to see the situation for what it was, was that it (and a plethora of other horrible things that were happening at the time) plunged me into a depression strong enough to numb me completely, and I lost the capacity to care about his opinion of me, and the energy to try to prove him wrong.

Allow that to sink in: my self-esteem was so impacted by abuse that I was thinking MORE LUCIDLY while DEPRESSED. I had been told for so long that I was a sinner, and I deserved to suffer. I believed it. I’m certainly no saint. But here’s the thing: after sin comes suffering, after suffering comes atonement, and after atonement comes forgiveness—not continued suffering. I atoned. I know that. If their forgiveness cannot come, if their forgiveness is nothing but a false promise held over my head like bait, trapping me into certain mental death, I do not need it. I do not need their validation. I believe that now.

The whole thing, unsurprisingly, made me feel crushingly misunderstood, and with that: isolated. I don’t think they would have been able to delude themselves so much about what kind of person I am if either of them actually knew what kind of person I am. And it’s excruciatingly painful to realize that someone with whom you’d been so open ultimately just knew you, without understanding you. And I of course feel like it’s my fault, like I should have done something to be more easily read, even though I’d been trying as much as I could to teach them my language. They never learned it.

I realized afterwards that I needed no Rosetta stone, or even Google translate. Plenty of people speak my language already. I have so many other wonderful people in my life to whom I am in no way enigmatic, friends whose understanding and empathy is mutual, positive, and incredibly validating. This only goes to show that others’ misunderstanding of me is a them problem, not a me problem. It’s not my fault if someone doesn’t ‘get’ me. That is not on me. I shouldn’t have to be constantly explaining and justifying my every action. It’s amazing to have conversations with my friends now that I am aware of this— for example, I’ll express frustration over a situation, then go to explain why it was frustrating, only to be cut off by them saying, “yeah, totally!” They get it without the explanation. And now that I see this, I see that they’ve always gotten it without the explanation, I just didn’t appreciate it or understand that that is the way things should be. I wish I had seen this earlier. But, well, I am overly empathetic, and I stupidly try to see the good in people, especially the people I am closest with, even when they’ve proven to be unworthy. The orchard was fruitless, but still, I picked.

There was (as previously mentioned) a plethora of other terrible things happening at the same time as the abuse, and in the aftermath of it all, I was angry, angry as hell, the angriest I’ve ever been in my life, and I used that energy to get through it and remind myself that despite all of these circumstances that made me feel so powerless, I can in fact still be powerful. But anger is a secondary emotion. The primary emotion in this case: hurt.

When the anger comes: I am Atlas throwing away the sky. I stand straighter, suddenly, arms free, now so much at my fingertips. I reach for something other than the heavens that have been my own personal hell since long before time existed for me to track the length of my suffering, and it feels like liberation. I like the anger. It makes me feel alive. It makes me unapologetic, more myself than I have ever been, because, really, if you’ll get faulted no matter what you do, you may as well do what you want. Never again will I answer to Zeus or any Titan. Never again will I answer to any man.