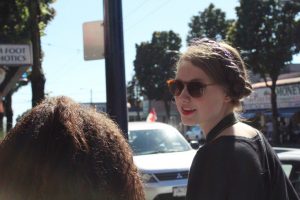 I always feel like the first post of a blog, first entry in a journal, first note taken in class, should be something consequential. Meaningful, y’know? Important.

But I had a blog before. The same blog, basically. It just got hacked (by a hacking group from Bangladesh??? WHAT??? I laughed for like ten years when I found out I s2g, not a hyperbole at all) and I got forced to scrap it and try again.

The first entry in my journal is never really more important than purchasing it in the first place, finding the journal with the perfect line width and texture and page size, then decorating it (every single one of my journals since I was 13 has been decorated– my favourite so far has the words “DO NOT FUCKING OPEN THIS,” with letters snipped from various magazines, glued on the front).

I’m taking a grade 10 English class this summer, getting it over with and whatnot, earing my four credits and abiding the education system that I loathe so intensely, and we took notes on various literary terms. Like metaphors. Which I already understand.

For our first assignment in the aforementioned English class, we had to pick a line from a list of quotations– they were referred to as quotes in the actual assignment sheet, but they’re called quotations, DAMN IT, AND THIS IS AN ENGLISH CLASS, GET IT RIGHT— and respond to it in any way we saw fit. The one I went with was an Alfred Lord Tennyson one, “words, like Nature, half reveal and half conceal the soul within.” I wrote a shitty poem in response (mainly because I didn’t wanna write a paragraph, let’s be honest here), and not all of it was very good but the one verse I actually liked is as follows:

even when strung together in lines,

even when wrapped in the red string of fate and handed to you as a gift,

they are not yours.

They will not mean to you what they meant to their author.

And maybe that’s for the best.

John Green talks a lot about books belonging to their readers, not their authors, and words and sentences being up for interpretation, and I think that’s a really cool way to look at things. Like, my boyfriend’s written a few poems about me (they’re pretty great, but I’m a little biased), and I’m never ever ever gonna know what exactly he was thinking of when he wrote them, even though they’re about me. I’ll never get the same message out of them as he does. I’ll never understand them they way he can. They’re not my words. I can interpret them however I want. They can mean something to me if I let them.

When I talk about wanting a blog post to mean something, I guess I’m just hoping I’m poetic enough to slap someone in the face with ~~deep thoughts~~ or whatever.

I think the point here is that that’s kinda up to you.